The life of Procilius is sparsely known.  Besides, he is the only recorded member of the gens Procilia for the Republic and the lack of a cognomen further indicates a humble origin.  Dictionaries often record two different Procilius (a historian and a politician), but they were likely the same person.  Since there are 35 years between this denarius and the dated events of Procilius' life, the moneyer could have been the father of the politician and historian.

Regarding Procilius the historian, none of his writings has survived, even as fragments, but he is quoted by Varro about the origin of the Lacus Curtius on the Forum (Latin Language, V, 148), Pliny the Elder on a text related to Pompey (Natural History, VIII, 2), and Cicero alludes that he wrote on Greek constitutions (Atticus, II, 2).  The scope of his works must have therefore been quite extensive.  In the aforementioned letter, Cicero shows his dislike for Procilius, which is perhaps related to Procilius' political role.

Indeed, in other letters, Cicero mentions that Procilius was also a Tribune of the Plebs in 56, and that he was allied to Gaius Porcius Cato (Cato the Younger's cousin) and Marcus Nonius Sufenas, also Tribunes that year.  They supported Publius Clodius Pulcher, Tribune in 59 and Aedile in 56, who -- as Tribune -- had banned Cicero from Rome for his repression of the Catiline Conspiracy, hence the animosity of Cicero towards Procilius.  In 56, Pulcher and the three tribunes, including Procilius, prevented the elections from taking place, in order to force an interregnum, so that Crassus and Pompey could be chosen consuls for 55 (Cassius Dio, Roman History, XXXIX, 27-33).

They used violence and bribery to prevent this election and were therefore sued.  Cato and Sufenas were acquitted, but Procilius was found guilty on 4 July 54 (Cicero, Atticus, IV, 15).  Apparently, he was not condemned for the complete illegality of his deeds, but because he had killed a man in his house; and Cicero complains that 22 judges on 49 still wanted to absolve him.  In the following letter to Atticus (II, 16), Cicero adds that there are rumors about Sufenas and his judges, possibly about corruption, but does not give more details.

The use of Juno Sospita refers to the town of Lanuvium, where she was worshiped, probably the hometown of Procilius.

Centaur - There is 2 Years ago

Joss - There is 2 Years ago 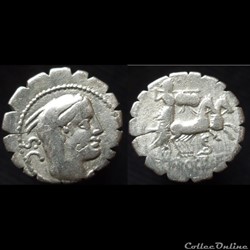 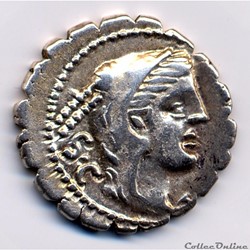