R/ Palm-branch tied with fillet and winged caduceus, in saltire; wreath above; Q SICINIVS below; III VIR on either side.

The plebeian gens Sicinia was one of the oldest gentes of the Republic, having produced several of the first and most vocal tribunes of the plebs.  The most famous example is that of Lucius Sicinius Vellutus, instigator of the First Secession of the Plebs in 494, which resulted in the creation of the tribunes; he was then elected at this magistracy the following year (Livy, II, 32-34).

Our moneyer was probably the son of one of these, most likely the latter, since the former was a firm popularis, whilst Quintus Sicinius opposed Caesar.  Indeed, the life of the moneyer is unknown, apart from his support to Pompey.  He minted the last "regular" issue in Rome before the outbreak of the Civil War in 49; the head of Fortuna, with the palm-branch and wreath, both symbols of victory, show the wishful expectation that the Senate would win the incoming struggle against Caesar.

Sicinius then escaped Rome with Pompey and most of the aristocracy, but continued to serve as moneyer at the service of his master (cf. RRC 444/1). 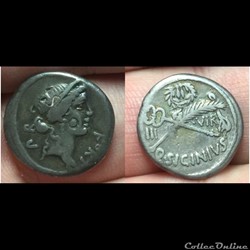 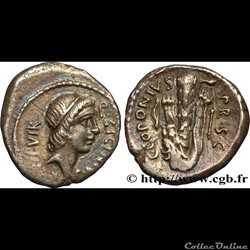