O/ Bust of Diana right, draped, with bow and quiver over shoulder.

This variant without the monogram in exergue is very rare; only three reverse dies seem to exist.

The moneyer belonged to the great patrician gens Postumia, but his family is much more difficult to ascertain. The patrician Postumii had few different branches and only one had survived by the 1st century: the Albini.

His obverse with Diana reproduces those of Aulus Postumius S.f. S.n. Albinus (RRC 335/9) and his probable son Postumius A.f. S.n. Albinus (RRC 372/1), thus implying that he was a member of the family. However, the Albini never used the praenomen Gaius. It is nonetheless possible that our moneyer was adopted into the gens, as it occurred with Decimus Junius Brutus (RRC 450), adopted by an Aulus Albinus. The Postumii seem to have had difficulties producing male heirs; they indeed had 9 consulships between 186 and 99 BC, but very few magistrates bore that name in the 1st century. The disaster of the campaign against Jugurtha by the brothers Spurius and Aulus Postumius Albinus might have hit the gens hard; Aulus was also murdered during the Social War (Livy, Periochae, 75).

The monogram in exergue could therefore be deciphered as AT for the plebeian gens Atilia -- the possible family of Gaius Albinus before his adoption. Another moneyer, Lucius Atilius Nomentanus, likewise ligatured the first two letters of his name on his denarii in 141 (RRC 225/1). This theory would explain both the unusual praenomen for the gens and the monogram. His adoptive father could also be one of the two moneyer mentioned above.

Crawford links the moneyer with a Gnaeus Postumius who accused Lucius Licinius Murena, the consul elect for 62, of bribery in the famous Pro Murena by Cicero (56-58), who also says that Postumius was a (unsuccessful) candidate to the praetorship that year. The case was won by Cicero and no doubt that accusing a Consul of bribery did not help his career and the fate of the Albini, as they disappeared from history after this. 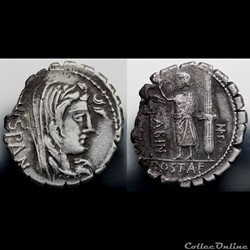 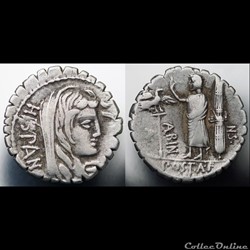 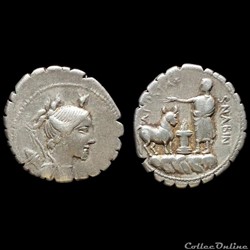 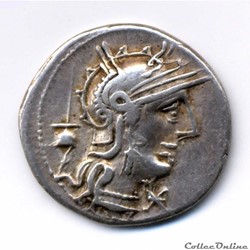 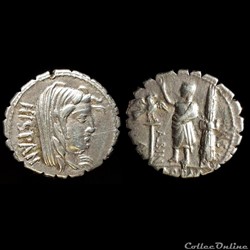