Are you a collector ?

On CollecOnline, find all the solutions to appreciate your collection.

Story of a forgery, a thirty years long saga

Hello,
I'm going to tell you a story that started over 30 years ago. This is the story of a numismatic find at the Grande Fouille of Rougemont in the Doubs, a peaceful region of France situated along the Swiss border. At this flea market, heavy raining happened in the morning and while looking for a refuge under an arbour I noticed in a saucer, bathed in rainwater, 13 Gallic coins (gold), 13 'statères' including 10 Ambianis and 3 Morinis and yes, statères! I inquire with the "seller", at first, he tells me that he does not know much as his grandfather found about twenty coins in a stream in the north and not being a collector he would be a seller. He wants to know more before selling. I try to make an offer by telling him that I personally classify his coins in the uncertainties of the East and to my great surprise he tells me that I am wrong and that they are Ambiani and Morini 'statères'. Oops!

I then leave him my phone number and ask him for pictures, weight of the coins and to make me a proposal. I notice thanks to the pictures that the 10 coins have the same defect on the chin: 3 small streaks. For the rest everything seems ok, the proposal far exceeds my budget because it is a global offer ( x 13). So I invite him to the big exchange fair in Besançon that we organize each year so that he can sell them (with the hope of being able to buy him a coin of each type). The day of our April exchange fair I introduce him to a trusted expert and there the verdict falls: the coins are fake. The price: by weight! The seller leaves with his coins. This seller was over 45 to 50 years old.

15 to 16 years later my son buys a coin (a statue of the Ambianis). While examining it, I find the same defects at the level of the chin. The same evening we call back the salesman (at the time I still had the pictures in my files) because it was indeed one of the 10 coins, well identifiable with for that one a corner burst with the striking. I save you to story of the long struggle to recover the major part of the transaction (this seller must have been in the 40 years so not a direct relationship with the previous one).

And last week (another 15 years later) I receive a call, asking me if I was interested in a minting die of a Roman or Gallic currency. I go to see it and there I am presented with two corners and a bronze punch, 3 steel blocks to hold these corners and a 26 cm long shaft with a diameter of 6 cm as a bonus a mint on a silver side. The seller: an old "gunner" grandfather. The loop was closed.

A forger's work but very interesting for the understanding of forgeries. 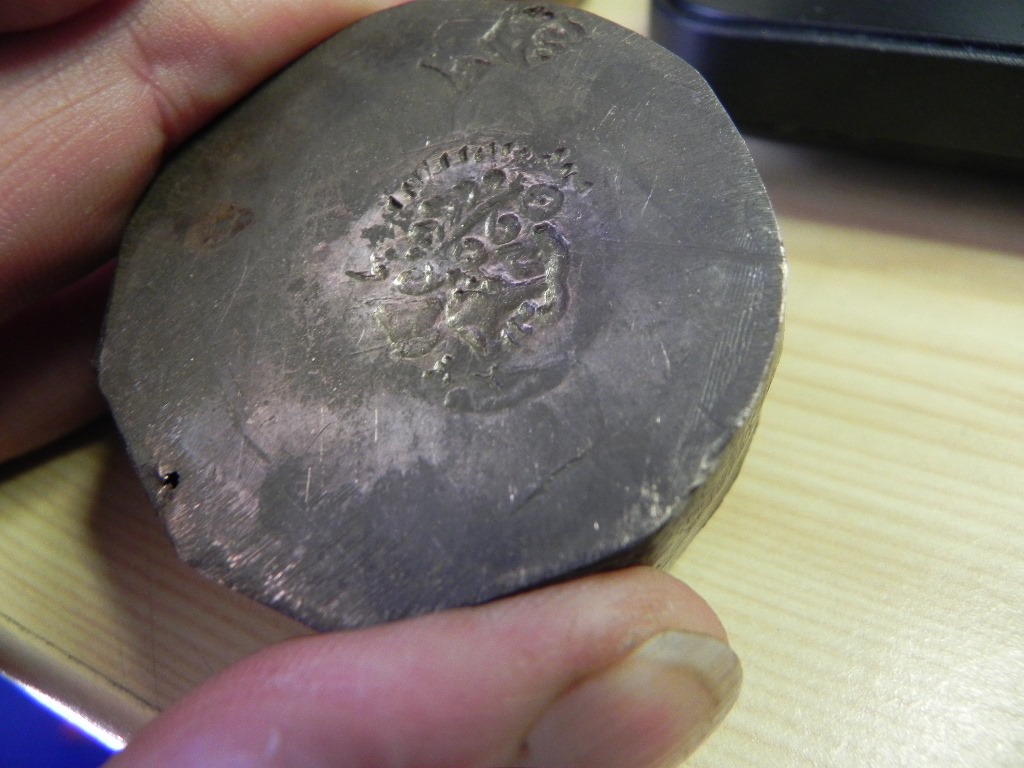 A few thoughts about the work of this forger

The first work was done in a piece of bronze weighing about a hundred grams. This engraving is not reversed and represents the future currency in the direction where it will be struck. This punch has a strong relief and according to the orientation in the verticality of the punch during the striking of the die, the face will be slightly deformed hence several variations of corners for the same punch. The height of the relief of the punch varies between 1.5 mm and 2 mm. I did not speak yet about the future corner, this one is also out of bronze thickness of 1.8 cm with a diameter of 5 cm for a weight of 275 g. This one was probably set to high temperature, then struck with the punch, then underwent a cold hardening to give again its hardness to him. The engraving on this corner is thus reversed (in hollow or as an intaglio).

This forger probably used a hydraulic or other type of press, as the corner holders have no impact marks (from a hammer or sledgehammer).
Why faking a statère? It's rarer, it's more expensive, fewer points of comparison and the transaction is done more quickly and the fool rarely brags about it! Moreover, thirty years ago, information was rare. For the record, photocopies were in black and white, as were sales catalogues. 😉

I have to show you the totality of the supports of the dies. The largest axis measures 26 cm 60 mm in diameter for 5.200 kg. It should also be noted that on the die there is another face (indicated by a white arrow), so the forger has tested another punch.
PS: We translated this story from French, please let us know if we could do better.

The following groups may be of interest to you